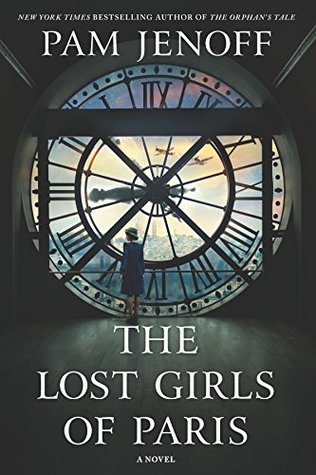 I found myself going through phases over the last few years where I would become so consumed with World War II and the Holocaust that I would read book after book on the subject, basically any that I could get my hands on! Eventually I need a break after doing this because as we all know, this is an extremely heavy subject and after 5 books in a row, I find myself mentally drained and consumed with sorrow, frustration, sadness, etc. I took some time off from my last read that covers this era so it was perfect timing when I discovered how many new historical fiction releases this year are set during WWII/the Holocaust.

The Lost Girls of Paris by Pam Jenoff sparked my attention right away – I love to read about women’s perspectives during the war because history is so often history focused on the men. It is also based on true stories of a group of female spies sent by the British government to Paris to try to undermine the German intrusion. Women served as an integral part of the war and this story focuses on three strong female characters that somehow all relate to one another: Eleanor – leader and recruiter of the group of female agents sent to occupied Europe, Marie – a single mom wanting to make more of a difference in her country’s fate, and Grace – a New Yorker who found an abandoned suitcase full of photos of women in uniform at Grand Central station 2 years after the war ended.

Twelve women were sent to German Occupied Europe as spies who were trained to send transmitted messages in code via radio devices to communicate with London in hopes of sabotaging the Nazis. Twelve women did not return. Sending women into the field blindly was a risky move but Eleanor was confident in her girls and knew better than anyone that they were capable of carrying out the tasks that were asked of them. Only having specialized secret codes to validate each of the women’s identities against fraud, a great deal of trust was placed in the women’s abilities to transmit messages under fake aliases that contained critical and sensitive information pertaining to the war. When one of the operator’s radios seemed to be hacked by the Germans, Eleanor must decide between trusting her instincts and going against her Director’s orders.

The Lost Girls of Paris was so intriguing and full of the perfect amount of war theory, personal relationships, character development, and thrill. This was the first book I’ve read about women spies/radio operators during the war and I loved it so much! These women were SO brave and strong – to give up their families and homes in order to serve their country right in the middle of German territory was incredibly heroic.

I can’t say enough about the amount of heart and history that poured right out of the pages of this book. For anyone looking to read historical fiction in addition to strong, heroic female leads, I will always recommend this read! As I love to do when I find a new author I enjoy, I now will need to read all other books of Pam Jenoff’s 🙂

To feel inspired, to be educated and to be moved are aspects I look for in books yet are things that are so hard to find. I felt all of this and more in with The Lost Girls of Paris and I hope you have the same experience.