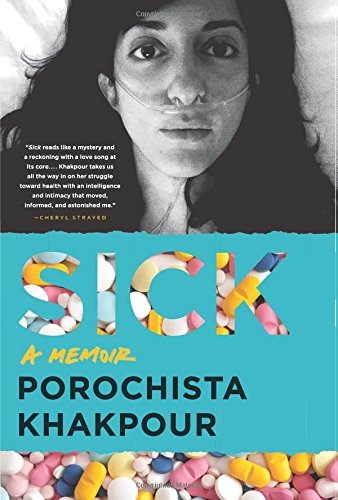 I love memoirs; I find them so intriguing and I get so lost in the author’s story and history. Sick, a memoir by Porochista Khakpour, was a whirlwind of a book and was almost unbelievable how much trauma and misfortune Khakpour has endured. This memoir kept my attention and was a quick read, but I wasn’t crazy about the writing style. It tended to jump around from place to place and it was difficult to keep people and cities and doctors straight. There wasn’t much of a chronological timeline put into place but this could be attributed to Khakpour writing the memoir while she was very sick, so very understandable.

Sick is a memoir that tracks Khakpour’s journey as a Middle Eastern woman living in America who has been sick nearly her entire life. She has battled drug and pill addictions, rape, has struggled to survive as a writer bouncing between LA and New York, and endured several toxic relationships. It’s known from the beginning that she was later diagnosed with late stage Lyme disease, but the book tackles her journey prior to that diagnosis. She spent years and thousands of dollars, blowing through doctor after doctor and hospitalization after hospitalization to only be told she was suffering from mental illness, skin disorders, neurological disorders and everything in between.

It is heartbreaking to read about Khakpour’s struggles and misdiagnosis when she truly knew and believed something was seriously wrong, yet people either did not believe her or blamed it on her depression. I admit I didn’t know much about Lyme disease, and it was difficult to read that some thought she was simply making up the illness or mentally convincing herself something was wrong. I enjoyed reading through some of the more factual portions about Lyme because I was not as educated on this disease as others. Aside from learning more about Lyme, this book highlights the indecencies and unfortunate views that society associates with people of color, women, drug addiction, and mental illness. There are many thoughts and feelings to be taken from this story and I feel it’s so important to voice for others to hear.

I was so excited to read this book because Khakpour was leading a book signing and discussion at a local bookstore. I also was excited to mention to her that we shared a similarity, both rescuing retired greyhounds! Unfortunately, she has recently relapsed with Lyme and was not able to make the event. I was looking forward to hearing more of her journey and hopefully learn her writing process and style. I hope in the future I will be able to meet her, because while the writing was a bit sporadic, she has a story to tell and it is one that is so, so important.