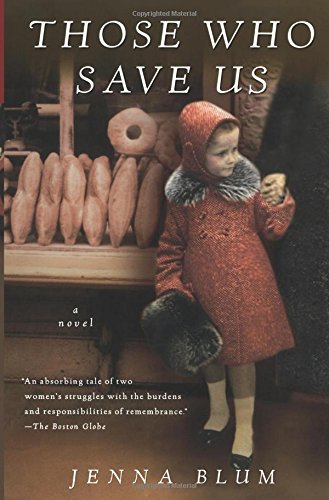 I’m a little late to the game with this book, but Those Who Save Us is unbelievable. As we all know, I’m a sucker for anything and everything World War II related, so when my aunt recommended I read this, I jumped right on it.

Anna Schlemmer was a young woman with a young baby, Trudy, living in Germany during WWII. 50 years later, Trudy lives in Minnesota and is a Doctor of German History at the local university. Studying and teaching the German heritage her entire adult life, Trudy is fascinated with the Holocaust, in particular. She creates an educational project that requires her to interview individuals of German descent whom survived the war to gain an insiders look at their perspectives and experiences during the war; to highlight the things they did, or didn’t do, in order to survive.

During her interviews and research, Trudy finds that her quiet and passive mother, Anna, has a deeper past than she was told. She knows that she was born and spent 3 years of her life in Germany during the war and that an American soldier whom helped liberate the camps migrated Anna and Trudy to the United States. What she doesn’t know is the secrets Anna kept and the desperation that ensued in order to keep Trudy alive.

Told in two perspectives and time periods, Anna during the war and present day Trudy, Those Who Save Us is an emotional, raw and important story that shines a light on the inhumanity that was present during the war. Anna had to do, and see, the unthinkable just to wake up the next day and do it all over again. Through Anna, we learn that even the worst of people can teach us invaluable life lessons.

The writing in this book is incredible and I was completely sucked in. Stories surrounding the Holocaust,  fictional or true, are so important. As years go by and we find more and more distance between ourselves and the Holocaust, it is critical to have books like Those Who Save Us out in the world so we may never forget what the millions of innocent souls experienced.

As Anna stated best, “we learn to love those who save us“; this line has stayed with me for days after finishing this book and if you read it, you will understand how impactful her words are.