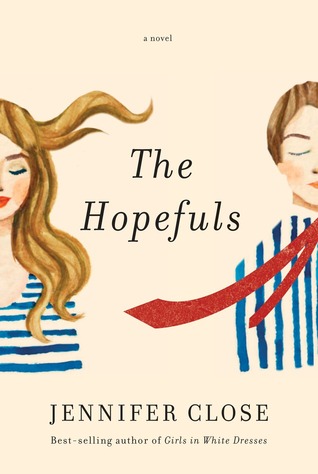 For chick lit fans that enjoy books that don’t weigh heavy on your emotions, you’ll probably like The Hopefuls by Jennifer Close. This was an easy read and I’ll be honest, although I didn’t hate it, I didn’t love it. It seemed like your typical chick lit storyline, except buffed up with a bunch of politics, literally. The story flowed smoothly and I did enjoy the author’s writing. Jennifer Close also wrote Girls in White Dresses and from what I have heard/read, it appears to be less saturated with politics so I’ll probably check that one out soon.

Matt and Beth are a young married couple who have recently uprooted their lives in New York City to relocate to Washington DC so that Matt could pursue a career on Obama’s political campaign team. (Obama, please come back….). Anyway, I’ve never been to Washington DC (I know, most schools go on an 8th grade trip there, but I skipped that grade and clearly missed out) so I’m not sure how the city truly is, but if it’s anything as described in the book, I think I’m good on visiting. DC was described as an ungodly hot and muggy city filled with a bunch of 20-30 year olds who were so competitively wrapped up in politics that they couldn’t see straight. I’m sure not all of DC is that way, but it fit for the sake of this story. This book was kind of similar to reality TV like any of the Housewives or Vanderpump Rules; you just couldn’t stop watching – or reading – the drama.

Matt and Beth become obsessed with another couple in a similar situation, Jimmy and his wife Ash, who moved from Texas so Jimmy could also work on the campaign team. They do everything together – dinners, lunches, trips, and any free time is spent as a foursome. It’s like they morphed into one big blob of a couple, kind of weird but hey, no judgments here. As the campaign goes on and the stress of politics take over, it seemed as if not one single person in the book was happy, ever. There was constant fighting, drama, and anxiety all stemming from the political races and the continual  need to fulfill some sort of expectation; to family, to the Obama administration, to the community, to each other.  It was obvious that relationships were going to be at stake and we assume some will even be ruined from the long and unbearable hours put in for the campaign.

I don’t leisurely partake in politics for fun, but in this day and age it’s hard to escape the madness of what’s currently happening in DC. Again, I digress. Politics aren’t my strong suit so this book seemed to drag on for me and in my opinion, it could’ve been wrapped up sooner. I was surprised how much of the storyline was centered around political races and campaigning. If I’m going to read chick-lit, I prefer more juicy reality-TV like drama that make you giggle at how scandalous it is.

Like I said, the writing flowed smoothly and I’m pretty neutral to this one, hence the 3 star rating, but I probably won’t ever find this book crossing my mind in years to come. As you may have picked up from my past reviews, I love books that stimulate my emotions and thought-process or books that I feel a strong connection to. However, that isn’t to say that I don’t also enjoy reading lighter books. I would just prefer those books to be a little less political top-heavy but as an avid book nerd, kudos to this book and the author. Stay tuned for my review on Girls in White Dresses.